He stands alone as the greatest entertainer of modern times! No one on earth can make you laugh as heartily or touch your heart as deeply...the whole world laughs, cries and thrills to his priceless genius!Feb. 05, 1936United States87 Min.G
Your rating: 0
0 votes
ComedyDrama
Report the error details.

The idea of the film was apparently given to Chaplin by a young reporter, who told him about the production line system in Detroit, which was turning its workers into nervous wrecks. In the film, Charlie becomes literally trapped in the machine and, in one of his finest patches of comic invention, is battered and buffeted by an automatic feeding machine introduced by his bosses to save time and money. Cured after his breakdown, he is arrested when he picks up a red flag that has fallen off the back of a lorry, and runs down the street to return it, exactly the same time as a left-wing demonstration comes round the corner. He meets ‘The Gamine’ in the back of the police van, who has also been arrested for stealing bread. From then on the theme is about two nondescripts trying to get along in modern times. “Smile, though your heart is breaking …” 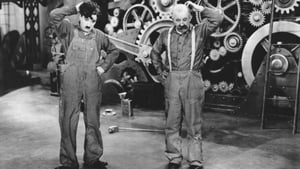